We’re so excited and cannot wait to meet and love on this little girl!

It’s crazy to me that we’ve been married for 4 years! Being totally honest I can’t even remember not having Sean in my life. He really is the best husband and my best friend…I am the luckiest! Our day was pretty low-key as we both worked. But we went out the Saturday prior to my favorite restaurant, Cooper’s Hawk, so I could get my favorite risotto that is TO DIE FOR!!

We love when he has business on the east coast because that means he “swings” by on his way out to see us. His visits always consist of  golfing, good food, and the best company! We think he should have more business trips to this side of the county 😉 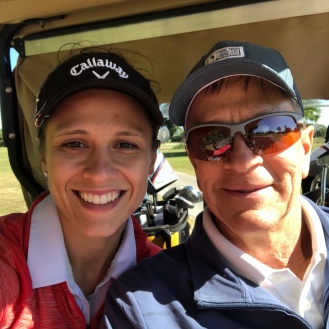 Not a good or fun thing, but one semester closer to graduating! I can see a pinpoint of light at the end of the tunnel. It’s also extra hard now that Sean is finished…think I can convince him to go for his doctorate?

Best movie we’ve seen in a LONG time! I may have cried it was so good. And the music!! We’re still singing along to the sound track!

Probably the most exciting moment of my life, no actually it was the most exciting! I didn’t think the test would be positive because it was so early and I just didn’t think there was anyway it would be positive…BUT IT WAS!!! I couldn’t believe it. I started thinking of  ways to tell Sean and I wanted to be super cute with it, but I had school that day and couldn’t get away to go to target or anything so I decided I would wait and tell him the next day. But that meant 24+ hours of me knowing without telling him and for anyone who knows me, there was no way I could keep that secret!

So that night when Sean got home I handed him an envelope and told him that his last Christmas present had finally arrived ;). He opened it and looked at the test upside down and was like “what is this” (I guess it’s a good thing he’d never seen a pregnancy test before). And I told him to flip it over. When he read the word PREGNANT on the front his eyes went huge and he looked at me and was like “is this real??” Haha, I don’t think I’ve ever seen him so happy when I told him yes. Such a fun and memorable moment.

But then came the hard part…keeping the secret, especially since we found out so early (like 4 weeks) in mid January. Luckily I had an excuse for looking so run down between working full time nights and going to school the rest of the time so that wasn’t hard to explain away. But even so it was hard not to just blurt out to our family and friends that WE WERE HAVING A BABY!!

Here is where we found out the gender..

Fast forward to February and we had bought these cute onesies to send to our families and had our announcements (still a few weeks away) all planned out. Unfortunately Sean’s grandpa got sick and we weren’t sure how much time we had left with him. So one night we were facetiming with him and we both had such a strong feeling that we needed to tell him we were having a baby. This video is such a tender mercy for us to have as it was such a special moment with him. I’m putting this here just so I always have it somewhere besides my phone.

This pregnancy has been a bit rough, just sick all of the time. And between working full-time nights and finishing up school I’ve been feeling it. But, others have been through it, so I will survive. And I have the greatest husband who has kept the toilets really clean for me ;).

We lost Sean’s grandpa in February and luckily we were able to travel to Oklahoma for the funeral. It broke our hearts to lose him, but appreciated the time to celebrate his wonderful life. It was so fun hearing all the stories and memories of Otis and you couldn’t help but feel the love everyone there had for him and Granna. We are so blessed to have such a wonderful family. 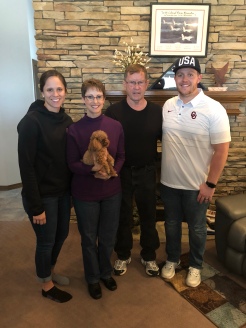 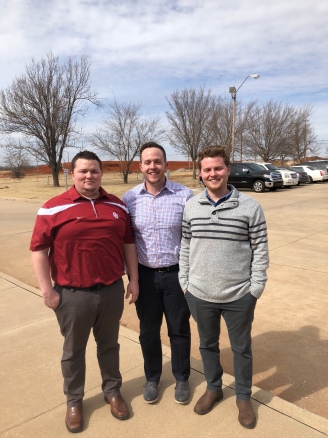 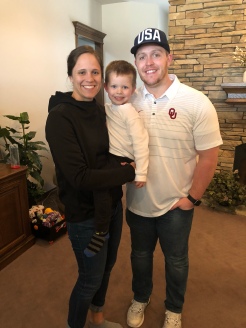 We finally got out to go golfing with the Burdicks before they headed back to Utah. It was a beautiful day and such a good time with them. We will definitely be missing them!

Just because I love this dog so much!! He is just the sweetest and such a good dog. Plus he’s super cute :). You can call me that crazy dog lady, I’ll accept that title.