Keeping with our new family tradition of trips instead of gifts we went to Spain for a week.

We flew into Madrid and drove through central Spain down to the southern portion and stayed in a city called Malaga. From there we spent days in Marbella, Granada, Rhonda, spent a day in Morocco, and mom and dad went to Portugal for a few days. We then drove back up to Madrid, stopping in Toledo on our way up and then finished the trip with a couple days in Madrid. This was an amazing trip! It was Sean’s first time to Europe and I always love watching him speak Spanish (super sexy).

We of course began the trip with a round of golf. The course was Marbella Country Club and was probably one of the hilliest courses I’ve ever played! But it was absolutely beautiful: 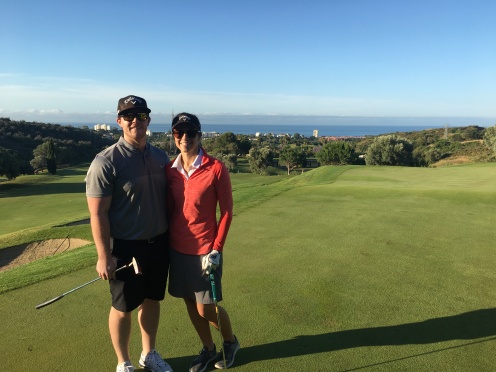 As we were driving out from the golf club mom says to Sean (after 6 hours of driving the day previous) “Sean are you driving on the wrong side of the road!?!” We all just busted up laughing, pretty much crying at this statement!!

In Granada we went to see the amazing Alhambra. Basically it’s a palace, more like a ginormous complex of palaces that switched hands between Arabs and Christians throughout history. It was beautiful, extravagant, and such a cool experience. One of my favorite things about this place was the view which overlooked the city of Granada below, it was really a fun day! 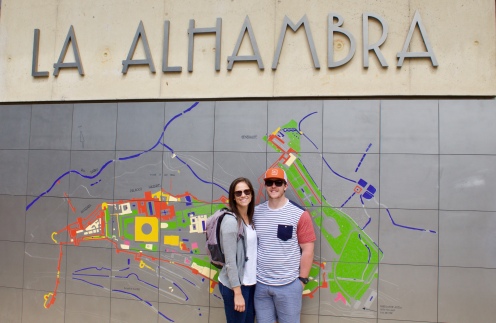 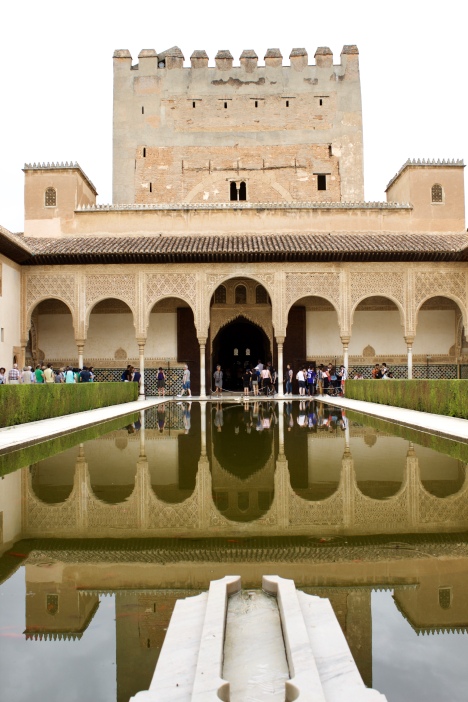 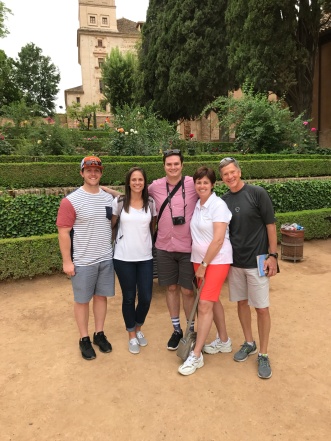 The next day was our Moroccan excursion.

We started the day by taking a ferry across the Strait of Gibraltar to the port of Tangier. This is the northernmost tip of Africa and weirdly enough it reminded me of San Diego as far as the weather goes (haha nothing else was similar). It also reminded me of India as far as the crowds, the people, and the craziness. As we walked through the market I felt as if I were back in Chennai with the smells (not so great), the butcher shops with meats just out in the air and all the spices!

We spent the day riding camels on the beach, walking through the tiny alleyways that litter the city, eating some amazing food, and experiencing a culture extremely different than ours. At the end we loaded back onto the ferry exhausted, but that’s always a sign of a great day! 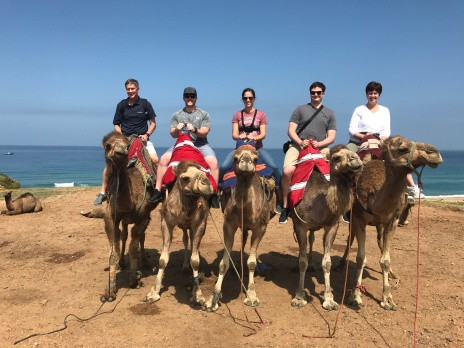 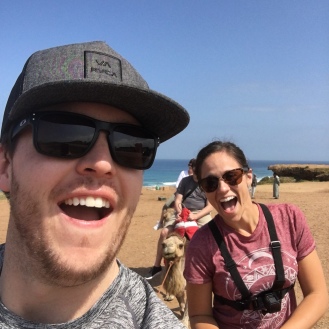 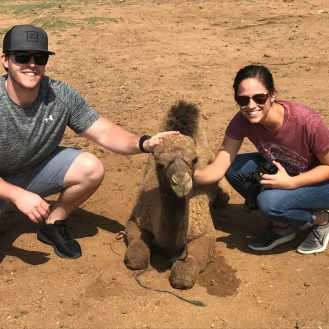 Tuesday and Wednesday were our pool hangout days. Well sort of; Sean and I did homework, Dan studied for his test and mom and dad drove to Portugal for a few days. We did however find an awesome nearby restaurant and Sean and Dan had an amazing Paella! We cannot wait until we can go on vacations without homework!! Then I wont have to wake up for class from 1-3am, haha that was fun! Soon enough I guess!

Thursday was a super awesome day as we went to probably one of my favorite cities of the trip, Rhonda. Dad heard about this city from a friend and we decided to go check it out. Such an awesome city!! We just spent the day walking the streets (one of my favorite things do, especially in Europe) and hanging out, it was perfect. 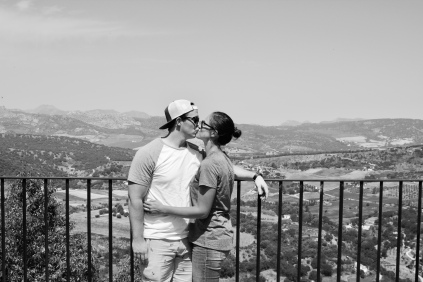 I don’t usually buy a lot on trips, but something I always get wherever we go is a painting. And I try to get pictures with the artists as well. I have paintings from Austria, Germany, India, Italy, and now Spain. I guess I just need to keep traveling to keep collecting paintings 😉

After our day in Rhonda we ended the night in a small hillside city called Benahavis. Again one of my favorites! It was nestled up in the hills above Malaga and the absolute cutest city! There’s just something about cobblestone streets, tiny alleyways and the doorways!! Seriously the doors in Europe are just amazing! Anyway, we finally found a parking spot and hiked our way back up to the restaurant we were eating at that night. It was this roof top spot that Sean had heard was really good (it was). We spent the night eating under the stars talking, eating, and laughing. I don’t know a lot about life, but I do know it’s nights like these that we remember. 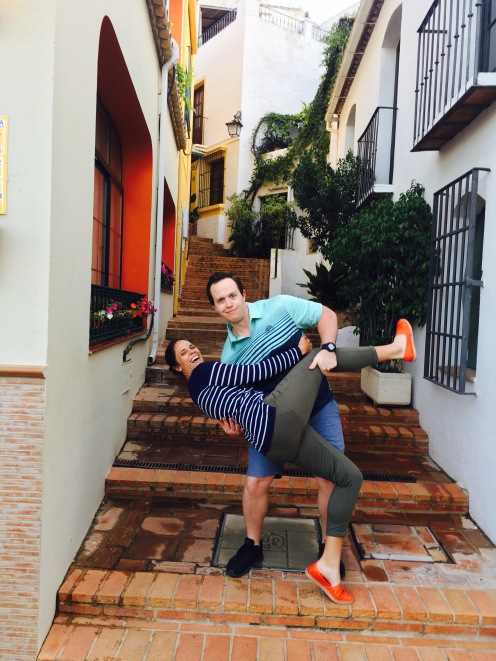 Friday morning we packed up and hit the road early to make it back to Madrid by a decent time. On the drive back we stopped at the city of Toledo…

Side note: any time I see the University of Toledo I always say “holy Toledo” totally lame I know, but I got to say HOLY TOLEDO as I was standing in Toledo. haha dorkish much?

We spent a few hours exploring this awesome city. Sean and I almost got hit by a car, which was pretty exciting. The cathedral here is amazing, which I guess pretty much any cathedral is usually extravagant and amazing so…that wasn’t surprising. 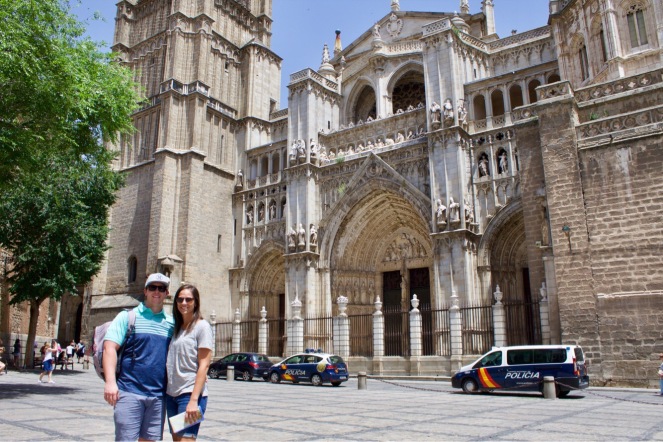 We then hopped back in the car and finished our journey back to Madrid. In Madrid we stayed in this beautiful hotel called the Palace and was located right in the heart of the city. After dropping our stuff off and doing a bit of homework we set off to our dinner spot. 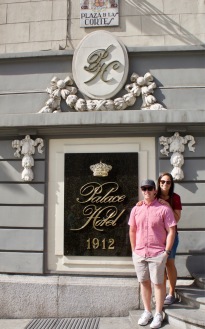 Dinners in Europe (especially Spain) are so different than here in America. First off all restaurants don’t open until 8 at the earliest, Sean and I were in trouble because we’re used to eating early with all the old folks in Florida. Also, here in America we’re all about getting in, eating, getting the check and getting out as fast as we can. While there dinner is time of conversation, being with family and typically takes hours. Why don’t we do that more? Why can’t we slow down long enough to enjoy the after meal contentment with our families more?

Anyway, we ate at this amazing (in case you couldn’t tell, the food was amazing) little restaurant that specialized in Paella. And this was of course amazing 😉

Saturday was our last full day in Spain and our busiest, sweatiest, and most tiring day thus far. We started early with morning bus tour of the city. I LOVE MADRID! The architecture, the history and the culture definitely make it a favorite. After the morning ride we found this awesome little bakery (as if those are hard to find there) where we got empanadas, pan de chocolate and of our course our Coke lights. What i’d give for a pan de chocolate and coke light right now! We then hopped back on the bus and took it over the “central park” of Madrid. When we were in NYC over thanksgiving I couldn’t convince Sean to row around the duck pond with me, but he said he’d do it with me here! So we carefully hopped in the row boat and took off on a nice boat ride. 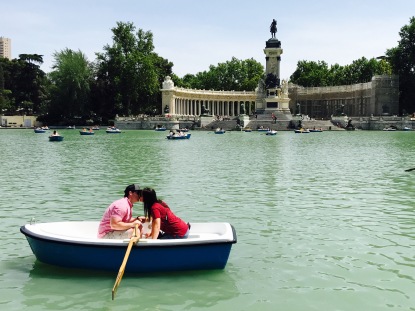 It was fun, but no quite as romantic as they make it seem in the movies. It was hot, we were sweating, it smelled like BO (Sean is convinced they don’t have deodorant in europe) and we were surrounded by half naked older women…haha not the prettiest sight. But oh well, we still had fun! 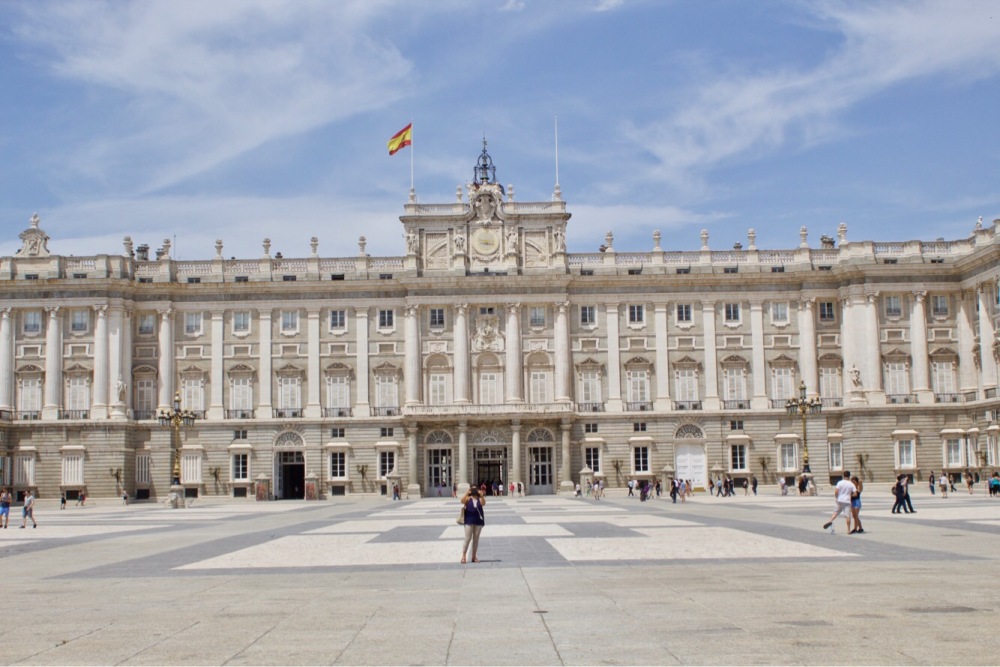 I was joking about the dinky part. I heard someone say it had something like 2800 rooms in this place…2800!! And I think our 4 bedroom place is ginormous! Anyway while we were there a violinist was playing on the steps of the cathedral. It was such a nice moment just sitting there in the shade, with the breeze blowing and this beautiful music playing.

Once our moment of serenity was over it was off again! Mom, dad and Dan went and found a segway tour of the sitting while Sean and I meandered back to the hotel. We walked through the tiny streets I love so much, checked out stores, got gelato, and churros con chocolate (yum!). I felt like I was on the bachelor/bachelorette, just walking the city streets holding hands with Sean, I loved it (and I love him). We ended the night with another amazing meal (I think Sean and I plan our vacations around food), gelato and more churros con chocolate. 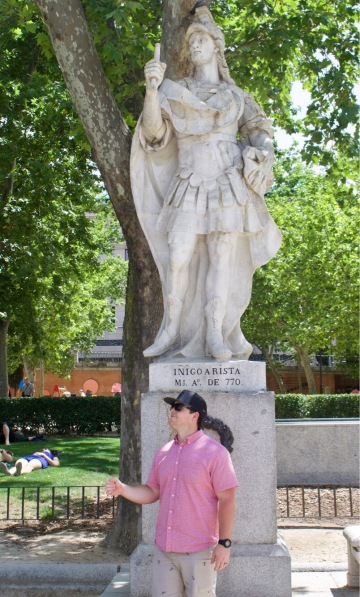 Sunday morning came. We said our goodbyes, took a selfie with mom’s selfie stick, and went our separate ways. This was an amazing trip! We did a lot, ate a lot, and spent a lot of time together which was nice. We’re so lucky to have these opportunities to travel together as a family and I can’t wait to see where our next adventure takes us!